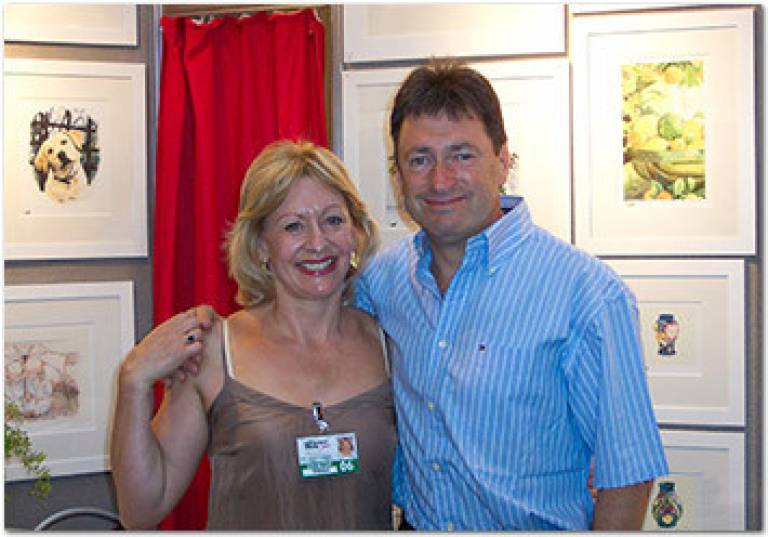 Growing up in the sleepy little village of Newton Longville, Buckinghamshire, Janie was painting pictures of the family garden at the tender age of four. Plants and vegetables as subjects have remained her passion and have led her to becoming a renowned botanical artist.

After leaving school she studied at the Northampton School of Art before life took her to London and then many places outside of the UK, notably Greece, Egypt and Saudi Arabia.

She subsequently studied at the Colchester School of Art specialising in illustration. She then juggled working in Public Relations & Marketing with illustrating books and magazines, commissions for portraits, pets and many other subjects. She eventually took the plunge to become a fulltime artist and is now able to specialise in her beloved floral/botanical subjects using, in the main, coloured pencils.

Janie's meticulous and striking compositions are given a noticeably subtle touch with her deft coloured pencil work. It is this attribute that gives her pictures the composition, detail and depth of colour that has made her originals, limited edition prints and art workshops so popular.

Janie is a member of the Society of Botanical Artists and is also a tutor on their Distance Learning Course.  In 2008 Janie was awarded a Silver-Gilt Medal by the Royal Horticultural Society and Gold in 2009 and 2014.  She is also a member of the UKCPS and shows her work at their annual exhibitions.  Amongst her awards she has been awarded Best In Show, Runner-up Best in Show and Best Botanical.  Janie exhibits both nationally and internationally and one of her works has been purchased by The Hunt Institute at the Carnegie Mellon University, Pittsburgh, Pennsylvania, USA.

Janie lives amongst the beautiful surroundings of the Dedham Vale on the Essex/Suffolk border.  She exhibits locally and nationally, together with running art workshops in her garden studio and other venues around the country.